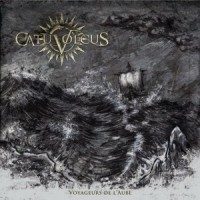 Pagan-black with a lot of atmospheric elements. It seems to become a trend, because lately I see more and more bands within this genre. Most of them originate from France, or, like Catuvolcus, from Canada. ‘Voyageurs de l’aube’, which means something like ‘Wanderers of the Dawn’ is the fifth release from this Canadian band after the founding in 2007.
‘Voyageurs de l’Aube’ is a fine record. Like mentioned before this band creates Pagan-black with an atmospheric touch. Some acoustic passages, black-metalpassages soaked with melody. Musically, I get reminded of Enslaved when listening to this, together with Woods of Ypres. The last is also honored with a strong cover of ‘Thrill of the Struggle’.
All in all, this release is pretty fine, though it has its ups and downs. The clean vocals are not as good as could be, but the acoustic, instrumental parts are really strong. However, the music isn’t really original, and clearly misses an own identity. Although the CD is decent, with so much competition in this genre, you clearly need to identify and distinguish yourself, something that Catuvolcus doesn’t. If you’re a fan of Enslaved, Woods of Ypres or if you’re a fan of melodic black-metal, it’s still something to check out, since it still is pretty good!