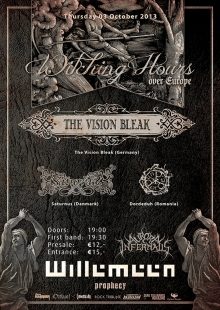 3 octobre. Arnhem. An evening where three bands played. Three bands which might not seem as a logical combination. The Vision Bleak, Saturnus and of course DordeDuh, the band for which folk-metal.nl traveled all the way to Arnhem.
How could a band like DordeDuh start better than with the song ‘Dojana’? They can’t. Immediately the atmosphere was set, and what became immediately clear was the flawless sound. All traditional instruments could be heard perfectly, even when the electrical guitar joined the music.

While the people in the venue were calm, nothing more could be expected while listening to the dreamy sound of DordeDuh. The band played tight, and took everyone with them in a trance with their atmospheric songs. Harsh passages were easily interchanged by the more atmospheric parts, which ensured the balance of the performance was great.
Besides that, there isn’t much to say. Do you like unconventional black-metal, interchanged with atmospheric passages? Then make sure you’ll see DordeDuh next time, because nobody could bring this music so perfect and pure as this band! Definitely recommended.
Score: 9/10