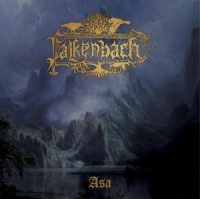 Sometimes, you have these releases that are just right. Artwork, music, the total package. Falkenbach, a one-man-project from Vratyas Vakyas releases his sixth album ‘Asa’, which has become a true masterpiece.
Normally, in this piece of text I’d write an extensive pleading about the positive and negative aspects of an album. However, this would be hard with ‘Asa’, because the album can only be described in positive superlatives. Immediately from the opener ‘Vaer Stjernar Vaerdan ‘ you get sucked into a vortex of something that can only be called real Viking-metal. Everything in this release breathes the atmosphere of the old Germanic Folklore.
While the atmosphere is the most important on this album, this isn’t the only thing that’s so special. The combination of electric and acoustic guitars works amazingly well and results in a deep, beautiful and melodic sound. The interchange between the harsher parts, which sound more like black/paganmetal and the softer parts, often filled with acoustic guitar and clean vocals, can be called perfect. Everything switches smoothly from one piece to another and forms a general whole. The songs are fairly short, but are full of alternation. There is not one song that bores after listening to it for numerous times.
This album is a masterpiece, and not only because its created by just one person. Everything is right about this record. Vocals, music, atmosphere. Take the time to listen to this, and let yourself take away by the beautiful melodies of Falkenbach. One of the best records from 2013, that’s for sure!