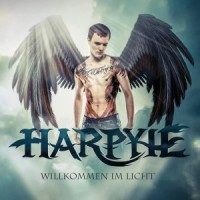 In 2013 we did a review on the debut-album of Harpyie, they’re back this year with a follow up.
The album starts with Aus den Schatten, a nice intro, it’s rather neat and tidy, but a nice one to enter the stage with. It’s followed by Der Letzte Held, a song as we’re used to by Harpyie. Rather neat guitars, solid drums, some medieval instruments and clean vocals. Not bad, but they don’t blow me away with this first track.
Wir sterben nie, is again a rather nice song, with an good solid piece in the middle, which starts very promising, but doesn’t manage to nail it.
Yes, Ausgebrannt starts with solid guitars and very nice medieval sounds. I waiting for something special to happen, the nice medieval tunes get me really in the mood for something special, but I’m waiting in vain.
The intro of Blutsbrüder is again very nice, but when the vocals are added it lacks a lot of tension again. And this is is unfortunately the case in the whole album. There are a lot of nice things, the slightly oriental tunes in Samson und Delilah for instance, a song with nice percussion as well.
Mädchen im Wasser is one of the better tracks of this album, the somewhat boring vocals fit well in this track, which could have been a nice somewhat more quite intermezzo.
Antarktika is a bit more solid and has this feel. Harpyie but the metalcore influences ruin it a bit. The nicest piece of the Harpyie sound are the very good authentic sounds as we can enjoy again in Jericho. Very nice, bombastic, and the more modern influences in the middle piece of the album are nice this time in contrast with the rap in the first half of the track.

Harpyie is one of the German bands which blends medieval times with modern music. Because they use elements from some different sources like metalcore, they have a slightly different sound. But they can be compared best with a band like Vogelfrey, but where these guys can build up some tension and are able to grab you with their songs, Harpyie can’t. This album is better than the debut of Harpyie and it’s full of nice ideas an delicious medieval tunes. But still the biggest problem with Harpyie is the lack of tension. At many points at this album I think, yes, here it comes, but it seldom does. The album is never bad, but I think they need to go back to the drawing board to redesign their style, to put more of the ‘wow-factor’ in their songs.