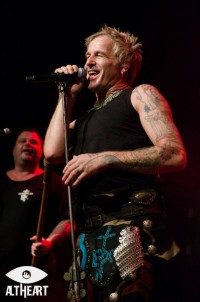 Well, that was quite a party in the Dynamo, Eindhoven! The German medieval rockers of In Extremo ensured that, on this (last?) summer day, the temperature was raised some extra degrees. Early in the evening the venue was packed with mostly German people. While there was no support-act, it was In Extremo which immediately entered the stage.
With a setlist mainly focused on the new album ‘Kunstraub’, interchanged with familiar classics like ‘Herr Mannelig’, ‘Frei zu sein’ and ‘Spielmannsflug’, you can say it was the ideal setlist for fans of mittelalter-rock. Most of the songs from the new album passed by, and it was a nice thing to hear that these songs sound a lot harsher live than on the CD, definitely a good thing! The sound was fine, although sometimes the hurdy-gurdy and all other traditional instruments couldn’t be heard clearly in the violent mix from guitar, bass and drums. However, this wasn’t a big issue overall.
The mead and the beer flowed generously, and the audience sang, sprung and clapped like there was nothing else. Highlight of the evening? A small boy of just 8 years old was asked on stage by In Extremo and gave an amazing drumsolo. Really cool, and even the band looked surprised that the little guy was that good.
After one and a half hour the show ended. In Extremo showed that they’re on the top of the German folkrockscene, and that even with a ‘small’ production, without fire and all that stuff, they can put up a really solid show.
Score: 8/10