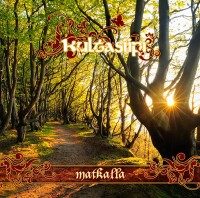 Finnish Folk-metal from the most Southern city of Finland, Berlin. Kultasiipi the fur folk fantasy metal band has made their second concept album. The journey of a scallywag in fur and fluff on his journey (Matkalla) between worlds.
The journey starts in a fine acoustic way and with the sound of dripping water. After this catchy guitars start the song Manala and then it’s obvious in which direction this journey goes. A solid basis, spiced up with nice recorders and a nice male voice.
In Korpi we can hear the, probably Finnish, birds sing their song. There are 17 tracks on this album, but the odd track-numbers are small interludes to tie the story together, just like in their previous album.
In Metsäpolku our traveller is told by the forest god Tapio how to find out his way through this forest labyrinth. Again nice authentic instruments to accompany the solid metal, but this time we get some nice authentic Finnish female vocals added to the male ones. Very nice combination.
After the short intermezzo Kotimatka, he journeys on to Humala, a drinking song, which won’t be recognized as such immediately. In the following intermezzo Kaipaus, the enchanting sounds of the Finnish instrument named kantele leads him to a young beauty.
After they enjoyed each other in the very nice track Intohime, a song which becomes rougher and more fierce during the song as you can imagine, he’s accused of blasphemy in Pilkka. After this wonderful night he has to flee from the village women who speak badly of him. Satansweiber (Satan broads) is how you would call this women. As you notice from the short track Pohnola it’s becoming very cold in the wilderness. He complains to Pakkanen, son of the winter in the track Pakkasen Sanoja about this weather, but Pakkanen won’t listen to him and lures him into the underworld. The nice Finnish vocals are again very nice and the bass is beautiful low and dark in this one. But strange things happen, causing our traveller to end up in the Northern light in the firmament.
He’s taken into the golden birds’ realm in Kultalintu and Lintukoto to rest and regain mental stability. The recorders fill our character with power.
In Matkalla he looks back on this confusing trip through mythology. And we know by now Kultasiipi is longing for Finland, but this track is a real hymn to Finland. It almost more Finnish then Santaclaus. The vocals and authentic instruments are very traditional and this has a very nice taste. The song is rather quiet, but the guitars are weeping in the background too. Great track.

A nice record to listen to this one Matkalla by Kultasiipi. The band has a lot of humour, but this isn’t very obvious when you listen to this record. What remains is a very nice combination of male and traditional female vocals, solid metalinstruments and plenty of authentic instruments like, kantele, violin and recorders. The album has indeed become harder, the improvement in the songs is nice. It’s is less messy compared with their previous album. And the Finnish folk-element is very clear, and this regards the traditional Finnish folk, and don’t think about the merry drinking songs with this. No, it’s obvious Kultasiipi adores the old Finnish history and culture. We can hear a nice improvement on this new album. Kultasiipi proves two things: you can use folk, without becoming a ‘drinking’ band and you still can get a unique sound in this genre.