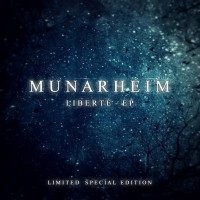 Previous to their debut-album, which will be released in early 2014, the German band Munarheim has released an EP called Liberté.

My first impression of Liberté is fine! A simple but atmospheric cover of a starry night and some trees. A cover which doesn’t reveal what music you can expect and this prevents you from putting in one or another genre on forehand.
Liberté starts with the track with the same name and what hits you immediately is the 1quality. A nice track with softer and harder pieces and a good grunt in German language by Pascal Pfannenschmidt.
‘Urkraft’ is next with a delicious double bass. I like the ratio between drums, guitar, but the supporting syths as well. Munarheim has got the right blend of grunt, supported by clean vocals, electric and acoustic, synths and whistle.
‘Erinnerungen’ is a nice acoustic track, starting with clean vocals which remind me somehow a bit of Odroerir. The song is building up and drums and flute is added and in the end they secretly added some harder guitar. A song to dream away on.
‘Ruhelos’ is a song which could be found on their previous EP as well ‘…und der wind sang’ from 2009, but the guys recorded again. A much fresher, more intense and bombastic version is at this record, and it is a very good final track at this fine announcement for their début-album 2014.