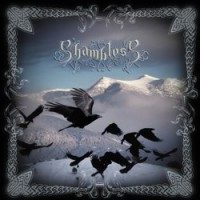 Ever since their previous release, Menra Eneidalen, Shambless has always been one of these rare discoveries to me that’s been keeping me fascinated. Unique, complex, unpredictable Elven compositions in a fictive language developed by the band itself. I’ve been curious as to how this band would turn out in the future, and with Irke Ranefas that point in future has arrived.

This album starts our a bit less strong than its predecessor, mainly because the tempo is a bit lower. The first song progresses a little less subtle than I was used to, so I was almost ready to get disappointed. Apparently there was no need to worry, because even before the song ends, Shambless proves that they have no intention on delivering an album any less than the previous one.
The combination of strong riffs and elaborate instrumental parts that makes Shambless so unique are still present, without filling half if the cd, as was the case with Menra Eneidalen. The band clearly chooses to give more content to the metalsongs of Irke Ranefas, with only one completely clean song in contrast with their previous record. A good choice, as the black- and deathmetal-parts fit perfectly with the dreamy folk melodies.
The audio quality has been slightly improved, but still does not live up to Shambless’ full potential. The main improvements have been made in the keyboard sounds, but the drums and guitars sound slightly outside of mix at times.
Despite these minor points and a little slow start, Irke Ranefas is a true gift to people who enjoy Shambless. The elements that made this band so unique are not only still present, but have also been improved.With Irke Ranefas they once again prove that the Shambless sound exists. I´m once again looking forward to their next album!