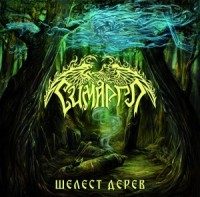 You can say you have a slow start when you’re founded in 2003, and your debut-album is released in 2013, but a lot has happened over the years with this band. Fortune wasn’t on their side and that’s why is took them so long to release an debut-album. But when things changed for them and they got a line-up which was stable, they didn’t only release a single in 2012, but they also managed to get a record-deal with Soundage Productions. So, this first album is immediately one, which is recorded and produced well. And this makes up for their slow start.
Simargl is a Russian band and you can hear this at once. Their music is typical Slavic Pagan Folk-metal.
In the first track they come out into the light of the sun. And the Slavic folk is immediately all over the place, with it’s typical tunes and flutes. Where we often see male and female vocals in Russian bands, Simargl does this different, they have only male vocals, but they are a kind of crossover between metal and folk, and this is nice for a change.
And the flutes, which are done by the keys, are present in the second track as well, they give it a very folk touch. It’s sometimes obvious they’re done by the keys and that’s a bit of a shame of course, but in other parts they sound very nice.
The full sound of two guitars, like we see a lot, is giving Simargl’s music a good solid basis, together with the drums and the nice bass. The folk-parts are from the keys and the vocals. The compositions are nice, too. There are no bad tracks at this album.
And the fifth track Шелест дерев is really beautiful with nice unexpected changes. And the same goes for the six track Печаль Светогора, but it’s in songs like this one, it’s too bad the ‘folk-instruments’ are done by keys, I prefer the ‘real-thing’.
The ancient gods form a large part of their lyrical themes.
When when you think it’s a pity a band like Beer Bear seized to exist, Simargl has Коляда for you. And you’ll think for one song you’re listening to the old Beer Bear. The album ends with the beautiful Ой, да боги…, what do you want more.. Or should I say, what do you want? More!

Very nice album by Simargl, I enjoyed it very much. The compositions are nice, typical Slavic folk-metal. The style of the vocal is very nice. Male vocals with a folk-touch sometimes, besides the clean vocals. The only thing which can be improved sometimes is the sound of the ‘authentic instruments’ like flute and accordion. They are done by the keys and I’m not very fond of that. Sometimes it sounds rather nice, but in other parts it’s very artificial. But besides this small point, this album Shelest Derev is very nice!