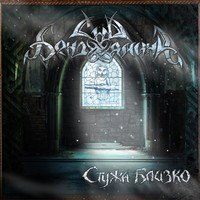 Sny Bendžamina released a new album, this Russian bands was always dwelling the somewhat more quieter areas of folk-metal, blending folk with metal but with rock as well. Will they stay in this territory or travel towards other areas?
They start this album with a fine intro, but when the second track starts you’ll hear clear Eluveitie influences, when this song progresses we get a kind of Amorphis like piece. And the third track Tam, gde vechnost’ is nice up-tempo again, with catchy guitars and very nice, bit cocky, flutes.
The Slavic heritage is obvious in Rastvorilis’ v tishine where the female vocals are done in the traditional Slavic way. It’s a bit quieter compared with the previous songs. And this goes on in the next one too. Khelli Yo has ever so nice whistles, but it takes until halfway the song to get a bit louder. The first half is a bit to neat and tidy.
But fortunately this louder atmosphere maintains in the next song, with nice fierce metalvocals, solid guitars and again nice whistles. Too bad there some pieces in the song, in which backing vocals get in, and it all sounds not as grim anymore.
More is a song to forget quickly, but Fort Shtaksel’ is nice, the harsh metalvocals stand out very nice against the sometimes neat backgroundmusic.
Voitel is a nice acoustic one, with beautiful acoustic guitars and good clean female vocals. But the fierceness is back in Trubadury, a track with very nice authentic instruments. And what to think of the nice folktunes in Khorugvi, never knew they knew this song, Son ar sistr, in Russia too, but it’s a very nice version of it.
We end this album with beautiful acoustic guitars in Pivnaya, very nice, it makes me feel warm and comforted during the time the sun sets and this album comes to an end.

Well this is a very nice album by Sny Bendžamina, their music still gives me mixed feeling sometimes. When they play their louder songs with solid and sometimes catchy guitars, the nice metalvocals and the traditional female vocals, spiced up with this delicious flute, it sounds very nice. But for instance when the male backing vocals are added to the somewhat quieter pieces, it can’t keep my attention. But you shouldn’t quit listening to this album too soon, because the second half is much better than the first half. All in all a nice album.