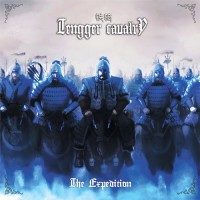 Tengger Cavalry released their first demo in 2010, and ‘The Expedition’ is the follow-up of their début. Is this something special or ‘just another one’? Well, Tengger Cavalry is from China, that’s something different for a start. And I don’t mean ‘Viking Metal from China’, no you’ll get North Asian Nomadic Folk-Metal, with real Asian influences. And that’s something different for sure.
Right from the start you’ll get real Asian sounds and melodies and that’s nice. It gives Tengger Cavalry a spot of their own in this crowded folk-metal world. With nice Chinese instruments added to the usual one they created a real nice atmosphere. Listening to Cavalry in Thousands, I get the delusion I’m watching a large amount of Mongolian warriors ride through the warm Asian fields.
And they have more of this. Another nice thing from this region is the throat singing, we get that in Black Steed and this is awesome. It’s a real pleasure to get some folk-metal, which is completely different. The guitars in a song like this are real nice too. Solid rhythm guitar and very nice solo pieces.
The only thing I’m not very fond of is the kind of singing in a song like In the Storm, it’s makes the whole sound very chaotic. And the singer has so much more to give. Like his dreamy voice in Khan for instance. Sometimes the music has rather catchy guitars like in Dance of the Horse, very nice track. The guitars play this ‘riding a horse’ theme, and the throat singing and delicious Chinese instruments give this song this nice taste.
When you like the dreamy Black Metal stuff, listen to Homeland Song. Which is a much quieter track, compared with the rest of the album. Leader Wolf is another rather quiet song, it’s an acoustic one with nice mouth-harp. The end of this album is a lot quieter than the first 7 tracks of the album. Fortunately the last one White Pony is a bit louder.

Tengger Cavalry has done a fine job with The Expedition, they have slowed down a bit compared tho their previous album Sunesu Cavalry. It’s not this album isn’t metal, it surely is, but it has this laid back feel of the great Mongolian plains, where the atmosphere had more of a fighting spirit on the previous album. You have to like the Asian kind of music with Tengger Cavalry, because they mix this with metal and they have added a lot of this Asian sound and they create an incredible delicious sound with this. Solid metal spiced up with great Asian instruments and nice throat-singing every now and then.
Do you want something special? Buy this!