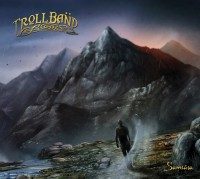 Two guys from Canada thought it would be fun to make black metal in the way Aktarum does it for years already. In 2011 they brought their first demo after which they decided to expand the band and to give birth to a real CD. Samsara they called it, what to expect?

Blood at the Heartwood, the first song, it sets of a bit cliche but still pretty promising. Soon you’ll notice that the blackmetal is a big part in Trollbands music, nice, but not awesome. I must admit that it sounds better after listening a couple of times though. Ravenous, the second song starts sounding a bit like Finntroll but with an odd clean vocal which gives the intro a very magical atmosphere. Quickly it all gets back to the Aktarum like troll/black metal.
Now River is something completely different, an song with acoustic parts where not this awesome magical clean vocals sound, but a very boring clean vocal makes the song pretty dull. Eventually the song brings more blackmetal which brings us back at the “Rock ‘n’ Troll” kind of music. Varying with the acoustic parts, I’d rather skip this song. Most of the CD is pretty much based on the style I described above.
The last song then is fun to listen to, just like the first one, but still not much more than average.

After the CD was done, I put on another record and forget this one. Great guys, you make music, but I miss the originality. This other than their previous record which had much more a sound of its own.