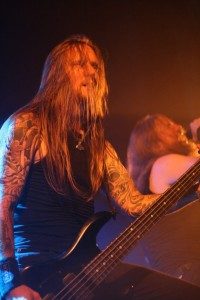 A rainy day, a sold out 013 and two massive support-acts: Hell and Carcass. What do you want more for an Amon Amarth concert? Last Friday Amon Amarth was ready to play in Tilburg again. The venue was sold out, and that was easily noticeable. While the venue was still pretty empty during the epic, theatrical Hell, it became a lot more crowded during the harsh sounds of Carcass. Both bands played an amazing set, though clearly not everybody liked it.
After these two supports, it was time for Amon Amarth. I should make a standard template for an Amon Amarth performance. The band never surprises, but always plays a more than decent show. The audience was as usual really enthusiastic, and did whatever vocalist Johan Hegg asked them to do. The band played well and clearly enjoyed themselves, though the stage performance was a bit static. The setlist was clearly focused around the new album, but of course they played classics like ‘Runes to my Memory’, ‘Death in Fire’ and sing-along-encore ‘Pursuit of Vikings’. It was a shame that the sound was pretty awful during the whole concert. The drums and lead-guitar were a bit too loud, while vocals and rhythm-guitar were too soft. However, the audience couldn’t be bothered by this, and during the whole concert they pit and headbanged.
‘Boring’ would be too negative to describe the concert. However, Amon Amarth couldn’t surprise. Beforehand you know exactly what you can expect; a solid, decent show where the whole audience goes wild. Is there something wrong with that? Of course not, but some variety would be nice for the die-hard fans.
Score: 7,5/10