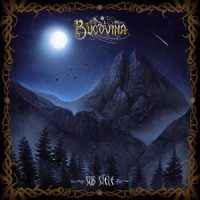 We got their single ‘Day Follows Day, Night Follows Night’ earlier this year, now it’s time for Bucovina’s second full length ‘Sub Stele’ (Under the Stars), as we can see on their nice cover-art. Like we’re used to we get very nice lyrics, which praise their homeland. And the mountains, valleys, forests and rivers in the Romanian highlands are so beautiful you can sing all day and all night about them. And that’s exactly what Bucovina is doing.
This is the first album without keys, but I have to admit, you don’t really miss them. And the main spot where there are keys in ‘Day Follows Day…”, I wonder how awesome this could have sounded when this part was done on guitar.
The music of Bucovina is still going strong, thriving on solid guitar-work mainly. Their music is just as solid as we’re used to. The compositions are nice again, there are simply no weak compositions on this album, but on the other hand it misses a ‘hit’ as well. But who cares, if every song is done properly?

For the fans of bands like Heidevolk, Bucovina is a very nice Romanian band praising the Romanian Highlands with solid folk-metal.