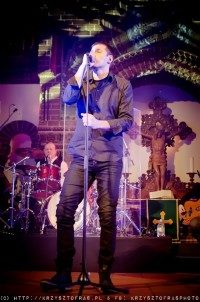 It’s quite a lot, driving for ten hours there, and ten hours back for just a concert. However, this was what I did on my Friday-morning, for the concert of Empyrium. Due to many traffic jams and accidents on the way to Berlin, we unfortunately weren’t on time for the listening session of the new album, but that couldn’t spoil the excitement for the concert. After ten hours of continuously driving (or well.. Driving? More like standing still in the traffic jams…) we eventually arrived at the Passionkirche in Berlin. A beautiful church where the concert would take place.

Duncan Evans
Before Empyrium would enter the stage, Duncan Evans had the chance to take care of the start of the evening. After everybody found their place, this singer-songwriter started with his set of approximately 40 minutes. In this 40 minutes, all songs of his new album ‘Lodestone’ passed by. While on CD the songs are just played with an acoustic guitar and vocals, for this concert Phil Wilcox joined in to support the music with his accordion.
What stood out immediately was the perfect acoustics of the church. The songs of Duncan Evans were lovely, melancholic and vivacious, and more than once I had Goosebumps. Never ever I’ve watched someone playing guitar with so much passion and loving, it was amazing to see!
Score: 9/10

Empyrium
After that it was time for Empyrium. Nothing could’ve prepared me on what was coming. Of course we knew that some excellent musicians would enter the stage, including Masterminds Schwadorf (guitar, vocals) and Thomas Helm (Piano, vocals). Besides that Allen B. Konstanz (The Vision Bleak) played the drums, Evíga (Dornenreich) and Neige (Alcest) the guitars. The bass was played by Fursy Teyssier (Les Discrets), the violin by Aline Deinert (Neun Welten) and the Cello was played by Christoph Kutzer (Remember Twilight). Definitely a great line-up, if you ask me!
Empyrium played for 80 minutes, and those 80 minutes were a musical perfection. I always refused to give a maximum score for a show, because I thought a perfect show wasn’t possible. Well. It is possible. The band made not even one mistake. The setlist consisted not only from old songs, but also the band played 3 songs from their upcoming album. What struck me was that the new songs are a little more bombastic, but they fit perfectly with the past material of Empyrium.
What was nice to see was that the audience was almost completely quiet throughout the performance, and listened closely to the songs that were played. After the songs, it was silent for a mere second, and you could feel the tension in the church. After this second, the crowd exploded in a thunderous, well-deserved applause.
The highlight of the show was when the song ‘Mourners’ was played. This song, that was played with so much emotion, caused me to have goosebumps on places I didn’t even know existed. This is music as it should be! When it was time for the band to leave the stage for the first time, the band got a well-deserved standing ovation, and the audience didn’t stop clapping before the band returned on stage.
When the band came back on stage it was time for two more songs, ‘Many Moons Ago’, and the new ‘With The Current Into Grey’ as an encore. After that the concert really ended, though it wouldn’t be a problem if it’d continued for hours longer!
Everything was right at this concert. The location was beautiful, the acoustics were perfect and the band played without making any mistakes. Every song just touched you, and at each song the goosebumps were the rule, rather than the exception. If you have the chance to watch this band live, do it! It’s more than worth the effort, even if you have to drive for over 15 hours.
Score 10/10