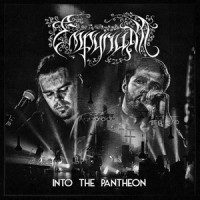 Not that long ago I reviewed the great live-CD of Empyrium’s first live performance called ‘Into the Pantheon’. While this gave a pretty good indication of how the band performed live, it’s always great to have the filmed material to get a full insight of the band’s live capabilities. The DVD wasn’t released solely with the live-performance, but also with an extensive documentary dealing with interesting matters resolving around Empyrium.
At first the performance itself. This was the first ever gig Empyrium played, although the band released their first demo already back in 1995. A lot of guest musicians got the honour to play the songs of Empyrium live, including bandmembers of Alcest, Neun Welten, Les Discrets and Dornenreich. The band played flawless, and this was filmed perfectly. No fast camera changes, no flashing special effects. This makes it really comfortable to watch and drift away to the dreamy sounds of this band. Now and then black and white shots are used, which enhances the atmosphere in a positive way.
Besides the full recording of the concert in Leipzig, also a detailed documentary is added on the DVD. This documentary, with a duration over one and a half hours, deals with everything that makes Empyrium so interesting. How was the band founded? What’s the history of the band? Why did this band never played live during the long time they already exist? How do you prepare a gig with such a band, with so many different people from different bands? This, and more questions are clearly explained. The subtitles aren’t synchronized at all times, but this isn’t bothersome. A nice anecdote mentioned was how the band started performing live. After a night of drinking (too much), Markus promised the organizer that Empyrium would play on his festival 10 years later, and thus it started…
This is a piece of pure quality from this German band. The performance itself is filmed really well and the sound is flawless. The documentary is interesting, and gives a clear image of what Empyrium is exactly. I can highly recommend this release!