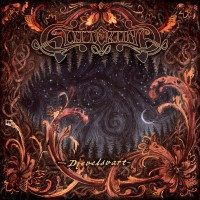 Glittertind is a band that always operated as a one-man-project. At least, that was how it was before ‘Djevelsvart’. This is the first album that was recorded with a full band. ‘Djevelsvart’ means something like ‘Devil’s Black’ and is the fifth full-length.
This band clearly has his own style. While this is great, it makes it fairly difficult to describe what the music actually is. Mainly it’s calm, vivacious and melodic folk where the acoustic guitar, the piano and the beautiful clean vocals play the lead roles. Sometimes this band reminds of Fejd, mainly because of the vocals and the structure of the songs. However, there are some harsher songs on the record as well, as for example Taaketanker, which reminds me more of Manegarm.
The tempo of this record is fairly mid-tempo, with here and there exceptions in both ways. The CD is diverse, and with a playing time just over half an hour the ride is over before you even know it. The end is something worth mentioning; Utgang is a melodic piano piece which closes the record in a beautiful way.
All in all a strong release from Glittertind, which proves that they’re also doing just fine working as a band. While the playing time is pretty short, this also means that there are no fillers on this album. Definitely worth checking out!