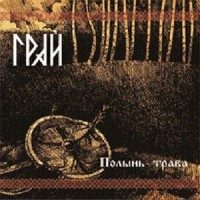 Grai signed with the Dutch label Vic Records a while ago and they released their albums with this label as well, making it available for folk-metallovers in Europe and USA too. Earlier this year they released a re-issue of their latest album and despite the fact we’re waiting for a new album really, they released a re-issue of their debut-album now.
When you make a comparison of the two albums, it’s obvious Grai has made a nice progression. In the second album much more accessible for ‘non-Russians’. The kind of folk on this album ‘Warmoth the Bitter Grass’, is much more towards the subdued ancient Russian folk. In the second album it’s more open and without becoming ‘beer-metal’ of a much merrier kind of folk.
But what’s so beautiful in Grai is this total integration of folk and metal, no ‘influences’ here, it’s just loud and fierce folk. Done with nice authentic instruments and great ‘Russian’ vocals. The female vocals are traditional Russian and the male vocals are in a very nice metalkind. It all sounds very authentic, you would believe they played folk-metal in Russia in the old days.

Nice re-issue of ‘Warmoth the Bitter Grass’. Too bad there isn’t an English translation of the lyrics in the booklet, so we can understand where the lyrics are about. A bit of a shame, this makes it more a re-release of this album, but on the other hand, we couldn’t lay our hands on this one in Europe until now.
When you’re a beginner in the Slavic metal, it’s better to start with another album, like the second Grai album, which was released in Europe earlier by Vic Records. But when you’ve fallen in love with the Slavic tunes, you should definitely have this one. Grai is one of the very best Russian folk-metalbands.