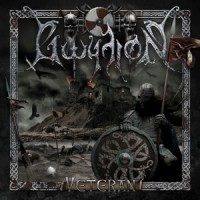 Gwydion, the Portuguese folk-metalband, is releasing its third full-length. Up until now, the band only released decent records, but could they maintain that quality?
The answer is simply ‘yes!’. The band doesn’t surprise, but continues on the same path as their last release. Epic folk-metal, like we know so well from typical North-European and Scandinavian bands. While the keyboard plays a great role, the main role is set for the catchy guitar-parts.
The album is varied, without losing that typical Gwydion-sound. Grunts, mixed with choirs, accompanied by thunderous guitars and epic keyboards. Sometimes it becomes a bit harsher, for example at ‘Womb of Fire’, sometimes it becomes more of a party, like with ‘Brewed to taste like Glory’. This record never gets boring, but it never becomes extraordinary good.
And while this record is really decent, it’s nothing more than that. It’s nice, that’s for sure, but it’s not a masterpiece. Does it matter? No, not really, just play the songs and bang your head!