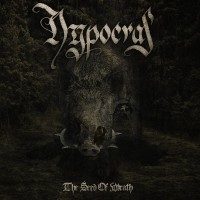 Hypocras, a band that already exists since 2006. Started out as an instrumental project, but eventually they added a singer. ‘The Seed of Wrath’ is the first full-length this band releases, besides an EP which was released in 2010.
Immediately after an atmospheric intro with flutes and drums, the violence is unleashed, and doesn’t stop after a bit more than 40 minutes. Harsh death-metal like Amon Amarth, but then with a flute in the style of Waylander. Usually, a band becomes a lot less brutal when a flute is added. Not with Hypocras. While it adds a good layer of melody to the music, the guitars stay brutal and pounding, certainly something good!
Because the amount of the flute-parts alters between the songs, the CD became quite varied which is nice to listen to. The flute plays a main role, together with the guitars. However, sometimes the flute is completely left out to create a more brutal sound.
All in all a mighty fine debut. Nice and pounding, and also really catchy because of the flute. Definitely worth listening!