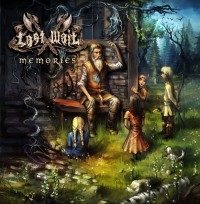 When Last Wail released their debut-album in 2011, I was pleasantly surprised by this album. A truly nice debut and I wondered if they could keep this up with the second one. And here it is, the follow up of their debut is called ‘Memories’.
It’s all a bit more in the style of Ensiferum, but they use more traditional instruments like flutes. And when they go on, it’s obvious they have developed a bit in the style of bands like Ensiferum. It’s not as unique as the sound of their first album, but it’s not fair to say it’s not as beautiful. They do this very well, with nice guitars, catchy tunes and fine vocals. And there was a time, when I didn’t really know Arkona and I doubted if they had a male singer as well. With Last Wail I didn’t had any doubts about the vocals, I was convinced they were male, but looking at their bandpicture, I noticed two women…. Yes, this beautiful dark metalgrunts are done by Alien. And I don’t think all aliens are women or the other way around, but this one is female, what a voice! It’s obvious this Alien is from Mars.
There’s no song on the album which will stick inside my head forever, but the overall quality of the songs is very good. All tracks are nice compositions, rather catchy, fierce and the addition of the traditional instruments is beautiful.
This is a very nice album for the fans of Ensiferum and similar bands.