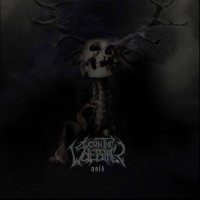 Lucian the Wolfbearer is a studio side-project of Sean M Kratz the vocalist of Benighten Empire. Atmospheric Nordic Folk Influenced, what that means you’ll find out soon when you get to listen to his stuff.
When this album starts with ‘I’, you’ll get nice traditional Scandinavian folksounds. A great song especially in these dark dark days of the cold season, which is a perfect match.
Most of the time I’m not to fond of solo-projects, there are mainly two reasons to this. The first one is, there are often nice ideas, but they tend to go on for ever. There’s obviously no one else in ‘the band’ who notices something goes on to long, something you notice better when you’re listening instead of playing. The second one in the often rather poor vocals, most of the time done by a skilled musician who sings as well.
To start with the last one, Lucian the Wolfbearer doesn’t suffer from this effect, it’s obvious he has good vocal skills and I like his voice in Lucian the Wolfbearer more then in Benighten Empire. His voice is rather dark and has a nice raw feel, and it’s perfect to create this northern mystic warrior atmosphere.
And in my opinion the music doesn’t suffer from the first one either. In a very long song like ‘Damnation not Eternity’ for instance there are lots of nice changes to keep it all form getting monotonous and boring. The changes in the music aren’t great changes in speed or rhythm, but are done with nice changes in the vocals giving it all a great tension. And this tension only grows in ‘Through Oblivion and Darkness’, sending shivers down my spine, delicious.
Don’t expect fierce raging metal on this album ‘Void’, the drums aren’t pounding this time, but support the acoustic guitar nicely. Only ‘Aeon of Death’ starts fiercely, the rest of this song also different from the rest of the album, electric guitars are destroying the rest of the song. This seems like something to fill the album with. It never has any of the strength of the rest of the album and could better have been left out.

A very nice album and a very nice choice of style, in my opinion Sean can make Benighten Empire the side project and focus on Lucian the Wolfbearer. When the weaker spots here and there are taken care of, this is a great sound, which makes me very happy with it’s atmospheric gloomy style of telling these nice old stories. So, if you’re in for something different, acoustic, dark, gloomy, atmospheric music with Nordic Folk influences, you should definitely try Lucian the Wolfbearer.