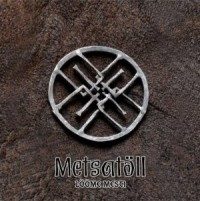 Metsatöll has released quite a number of albums over the years. In 2012 they released a nice live album, but we have to go back to 2011 for their last studio album with new songs. Well there’s good news in March next year they will release a new album. While we’re all waiting for this Metsatöll released a single ‘Lööme Mesti’.
And again Metsatöll made a nice song once again. The clear coherent style which could be heard on their previous studio-album ‘Ulg’ is still there and that’s very nice. Don’t expect major changes in their style the song is a typical Metsatöll one. It has strong solid guitars and vocals like we’re used to, nice fierce. The authentic instruments are very obvious, giving Metsatöll their special delicious sound.
When this is an omen for their upcoming album, it’s obvious fans want to have that one for sure, because they’re still making high quality songs.
When discussing Metsatöll albums, you can’t forget about the cover-art. The cover-art of this single is rather simple, it’s nice, a bit mysterious, but I do hope they draw another fantastic cover for their upcoming album.