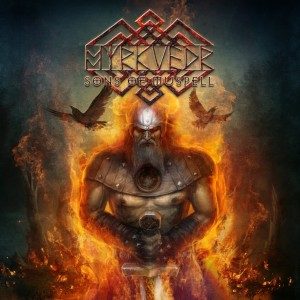 A great thing about writing for this website is that once in a while you get a record from a band you have heard of once but never really listened to them. That’s exactly how Myrkvedr’s new album found it’s way to my desk. I definitely had to listen a few times, but now I finally have my judgement for you.
I hear ice break, water, a campfire and a ambient keyboard intro. Than it’s time for music, Viking/blackmetal is on the menu today. Quickly it’s clear to me that the quality of the recording is not optimal (though it’s blackmetal so it could be on purpose of course) the vocals are much too soft in my opinion and there not really my type of vocals too. Though it’s already in the first song clear to me that the folk is gonna be a big part of this record too. The album takes a long time to really take of. Several times I almost wanted to put it off, but than at the seventh song of the 15 in total, everything changes. Sindres Saga/Jörmungandr is the complete turn in the record and from here there is even more folk especially in the tunes and it all gets more shape somehow. Brynhilds Call then is a really good song!
Though the quality of the recording and mastering stays an issue, I hope this can be dealt with on future records. Hel is a very gloomy dark song, it’s more ambient than something else and it most reminds me of The Misty Mountains Cold from The Hobbit.
At the end of the album we also get Axes and Mead, a jolly up-tempo drinking-song, well, it’s impossible to go without in the “folk-metalscene”.
The finishing touch now is Vandraden, a cover from Nordman.

It’s hard to give one grade to this CD because it clearly has two parts, a completely uninteresting first part, and a pretty good and most of all potential second half. Especially the fact that this very young band has quite some potential to grow in the future is something I find very important here. So I hope everyone will give these young Swedes an honest chance.