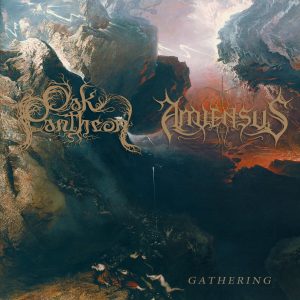 Oak Pantheon and Amiensus, two befriended bands from Minnesota, decided to release two songs together. Amiensus releases a whole new track, while Oak Pantheon chose to rewrite a song which would originally be released on the CD ‘From a Whisper’.
Amiensus starts with a song of almost 10 minutes called ‘Arise’. A beautiful acoustic intro, slowly but suddenly becoming more heavy. Around the two minutes the power really kicks in. Lovely melodic riffs which remind me of melodic-deathmetalband Insomnium. Clean and grunts are interchanged just fine, on a background of beautiful guitarparts. It never becomes really harsh or brutal, but it stays atmospheric and melancholic. Great song!
After that, it’s Oak Pantheon to show their part of the collaboration. Of course we still know this band from their genius record ‘From a Whisper’. This song has the same high quality as that CD, though the song feels.. Different. The song is more straight-forward, with an almost groovy guitar- and drum-rhythm. The tempo is pretty high, up until the acoustic intermezzo. With help of the guitars, this intermezzo is build up gradually until an epic climax, wonderful!
All in all a decent release, though 2 songs are maybe a bit too few. Never heard of these bands? Definitely take the time to check them out!