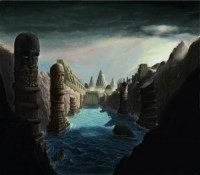 The pirates are back! The Privateer releases with ‘Monolith’ their second album. While people usually think of Alestorm or Swashbuckle when the term ‘pirate metal’ is called, there is obviously more than just these two bands. The Privateer is a great example.
The Privateer doesn’t sound like the before-mentioned bands, not at all! It’s a mix of melodic deathmetal, acoustic passages, here and there some influences of classic heavy metal, and of course some elements of folk-metal, where the violin plays the lead role.
As you can see, these are quite a lot of different elements, and that ensures a varied album. No song is the same, and they found a good balance between harsher, pounding songs and acoustic, atmospheric songs. This results in an album that keeps your attention, and it stays interesting during the playtime of almost an hour.
However, not everything is great about this album. While all compositions are really fine, and sound pretty catchy, the album doesn’t sound as a whole. Because of the many different style-elements implemented in the music, you can’t clearly pinpoint what the sound of The Privateer actually is. Nonetheless a really decent record, with songs that are going to be a success when played live. Nice for those fan of pirates.