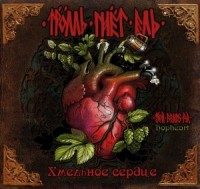 It has been a while since we heard something new from Troll Bends Fir, back in 2011 they released a compilation album through SoundAge Productions. And this was a very nice one. Hoplnir is one of my all time favourites, whenever I’m a bit down, I’m playing that one, and this keeps me smiling for at least a week. They describe their style themselves as Beer Folk, and this suits the music well. But although it has humpaa here and there and is merry, it isn’t the straight forward folk-metal. No, Troll Bends Fir has a lot more to often. Where the music is rather merry most of the time, the compositions have a lot to offer, not only nice to drink and waddle on, with a lot of alcohol between your ears, but it’s also very nice to listen to when you’re just sitting down. You can even shout along. Of course you can do that if you’re really drunk in Russian, but some of the tracks have English lyrics, most of us will understand those and then there’s a song like Bierleichen, with German lyrics!
The basis of all this is formed by solid guitars, bass and drums, but they know you can make the best folk with authentic instruments, so tin whistle and violin is added. Add a raw beer-voice to this and female vocals here and there and you’ll have all the ingredients for a nice album. With a lot of up-tempo tracks like Troll in the Moss and St. Patrick’s Day, but as we’re used to by Troll Bends Fir sometimes a slower one like Damned Bottle.
And you’ll find great philosopher’s at the bar late at night, so the lyrics are ok too. ‘Hitting an Owl with a Stump is the same as hitting a Stump with an Owl’, you won’t think of that when you’re sober! And there’s a special song for all our hero’s, going to enjoy they weekend in style in ‘Friday Warrior’.
And there’s even some space to put in a more serious and traditional sounding folk song as Earth Circle. Very nice track in which TBF shows once more they’re not only in this for the beer. They’re very serious in making nice music.

Troll Bends Fir has made a very good album again with this one ‘Hopheart’. An album with lots of nice songs on it, which are very entertaining and with which you never get bored, don’t matter if you’re drunk or sober.