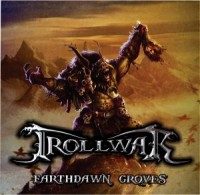 Earthdawn Groves starts of with a nice orchestral prologue, which is followed by the first track: A Tale of Greed. Despite the blast-beat intro of this song, it takes over the melody of the prologue perfectly. Immediately you notice the quality of this band’s music. The accordion is a nice touch and gives Trollwar’s music a nice extra dimension. The advantage of the accordion is that the keys can focus on the symphonic side of their music. Trollwar mentions bands as Finntroll, Amon Amarth, Equilibrium and Ensiferum as influences and you can hear that throughout the entire album. After A Tale of Greed comes the song Trollheimen. This song picks up where the previous song ended and keeps the happy spirit. After that it’s time for the first ballad of this album, Book of the Damned. The intro is very nicely done and reminds of balfolk music. This 7 minute song has a few rhythm changes throughout the song which can make it harder to listen for the untrained ear, but for me personally it kept the song interesting. The song Trollka opens with some bar sounds. It sets the mood for a nice party song and opens with some spoken lyrics. It’s a nice mid tempo song but later on that will change and the double-bass rythms will kick in again. Which is a shame in this particular case, a song like Trollka doesn’t need that to stay interesting. The next song, Set Sail to the North, has a nice Alestorm touch to it. It’s a nice piraty trollsong with a (for my taste little long) break in the middle. After the break they build up nicely where the left and end the song as is started. Now it is time for the title track of the album, Earthdawn Groves. It is a song That deserves to be the title track, I think it’s one of the best tracks of this album. Eartdawn Groves has a nice folky sound throughout the song. You can hear that even better in the acoustic version at the end of the album, shame they didn’t do vocals there. An Hymn for the Vanquished is your typical Trollmetal song. This is a song that could also have been written by Fintroll for example. The final “real” song of this album is titled The Fallen and is also the longest song. Despite its length, over 9 minutes, it is a song that won’t get boring. It has an intro that reminds me of Rammstein, with only keys followed by guitar solo’s. The acoustic break is very good and gives some well deserved solo time to the accordion followed up by 2 guitar solo’s. These 2 solo’s are performed very well and don’t have any notes too much or too short. The epilogue is the only “bummer” of the album. It starts all exiting and ready to burst into one more bit of Trollmetal violence, but is doesn’t. It leaves you hanging and that’s a shame.

The production of Earthdawn Groves is good. Only minus is the guitar sound. It’s a little thin, which causes it to blur away in blast-beat parts where every band member is involved.

All with all, Eartdawn Groves is a good album which has to be present in the CD collection of all the Trollmetal fans.