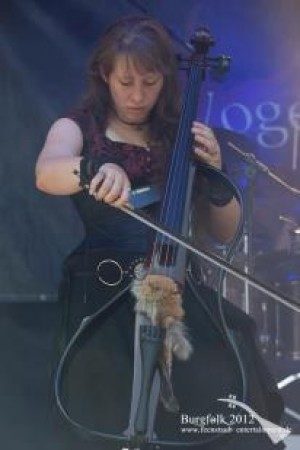 Vogelfrey, the band that up until now always played a great show. That was the foremost reason to drive all the way from the misty Brabant to Oberhausen, just to see this band.

Aeronautica
Before Vogelfrey could enter the stage, it was Aeronautica who started off. At the moment we entered we couldn’t see a thing because of the smoke hanging there. Apparently the band brought their own smoke-machines, but they didn’t pay attention to the amount of smoke in the venue.
After the smoke drifted away we saw a band completely in steampunk-style. Musically it reminded me a bit of the German band ASP. While the sound wasn’t that good, with especially the drums being way to loud, they gave a decent show with some really great riffs.
Score: 6/10

Harpyie
After that it was time for Harpyie, a band I never really liked. It couldn’t convince me this time either. For some reason the band misses the ‘spark’ to really make me enthusiastic for the music. The stage performance was more than fine, and they convinced the audience to participate. However, it just wasn’t really convincing. That the violin-player played out of tune was the worst that could’ve happened, and it happened.
While they’re pretty enthusiastic, the music just couldn’t bother me. Luckily it soon became time for Vogelfrey.
Score: 6/10

Vogelfrey
Well, Vogelfrey. I never saw them giving a bad show. While the audience was fairly tame, the band seemingly enjoyed themselves. The well-known songs were all played; Heldentod with the popmusic-medley, Ball der Gehängten, Schuld ist nur der Met, you know what I’m talking about. However, Vogelfrey prepared two surprises; Puella Rufa as an encore, and Freitod. You’d say that the last one isn’t really a surprise, but it was in the way Vogelfrey played it, since they played it entirely acoustic!
This worked really well for the song. Normally when they play it live, the sharp edges, which makes the song so awesome on CD, are numbed out. That these edges were replaced with a certain swing made this immediately to an ideal live-track!
However, not everything was good. The band clearly contended with the bad sound. The balance was sometimes way off. The sound changed continuously; sometimes the violin was really loud, at other times it was hard to hear the vocals. However, this wasn’t that bothersome, because this time Vogelfrey rocked as well!
Score: 8/10