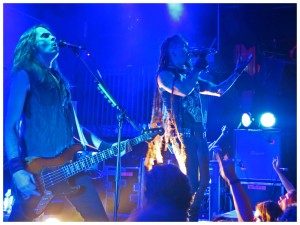 I was just in time able to drive to Patronaat in Haarlem. Not a bad plan, because Amorphis came by and from earlier experiences I can state this is always nice. Amorphis is busy doing their ‘Circle’ tour and Starkill is doing their support on the European part of this tour.

Starkill
I had never heard of Starkill before and what a surprise this band was!
The four guys from the US owned the stage and fired their music into the veneu. Anyone who wasn’t impressed by this band can as well go and live in an retirement home. The speed of Children of Bodom, the nice grunts of Ensiferum, the guitarsolo’s of Dragonforce and the raging riffs of Amon Amarth and you got Starkill. Keep an eye on these guys!!
And you’ve got the chance because Starkill is going to support the upcoming Turisas tour.

Amorphis
Amorphis is something else and they are the reason the Patronaat is loaded today. Just a working day and they played a rather small venue, where you have a good view on the podium. What is there to tell about an Amorphis gig? It’s simply good, always…
The band played nice songs, in a very tight and passionate way. They always show they’re able to create a nice mix of new, old, hard and softer songs. Their act is very well thought through and the lighting is nice and suits the songs.
Very good gig, when you’ve never been at one of their concerts, you should definitely put it on your ‘to-do-list’.