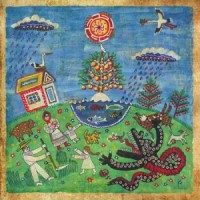 Chur released their album ‘Lykho’ in 2009 originally. They remastered this album and added a few songs to it. Unfortunately the original album is missing in my collection, so I’m not able to make a comparison of both versions.
Lykho starts with beautiful traditional folkloristic Ukraine music. This intro makes way for the metal to move in in the title-track of this album. This is what Chur is about, beautiful blend of traditional Ukrain music, which is of course of the Slavic kind. The combination of male and female voices is something we notice a lot with these kind of folk-metal. The voices in Chur appear in many combinations, with clean male vocals, sometimes traditional.
Chur is in fact a solo-project and most of it is done by one person. This includes vocals, guitar and authentic instruments. And while he has a nice voice, this is also a pleasant aspect to listen to. Who needs a band when you can do this on your own? The weakest part is the drumming, it’s not bad, but rather functional. The drums take away a bit of the metal-sound, because they’re not of the pounding metal-kind.
Although there aren’t any bad songs on this track really, Йду на ви! (I’m Going to Attack You!) is one of the better ones. It combines all the good elements, nice authentic instruments, solid guitars and a rather cathy tune. You can really improve you foreign language here. Even if you don’t understand a word, you think you can sing along, at least I did.
A true musician is able to express his feelings through music in a way everybody can understand him. You don’t have to look at the title of the song called Spring, when you hear it, you intermediately know it’s springtime.
When the remastered tracks of the original album are finished, we get a few nice bonuses. Three different versions of some tracks and a beautiful proud last song. You don’t need to mention Chur is proud of his beautiful homeland.

Chur made a nice re-issue of this album, and because it don’t have to cost you a lot, it deserves a place in your collection, because it’s really a nice album! And when you’re a fan of the Slavic folk-metal, this is definitely one to buy!
This album is available, and the nice thing is you can name your own price, at Bandcamp.