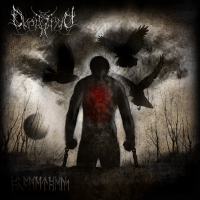 Demoterion is a brand new Folk/Pagan Death metal band hailing from Italy. Founded in March 2013, they give us their first song with the EP Prometheus and the results are not bad.

The EP starts with a nice clean intro. The first thing you notice here is that the keys sound rather cheap and this will remain an issue throughout the EP. Also the drums are quite loud in the mix, from time to time it will tend to overwhelm the other instruments. But besides of that, its an EP with some good guitar riffs and and some nice songs. The second song (God’s Servant) starts off with a mid tempo drumbeat and that beat remains throughout the song. The funny part in this song is the bridge, like it came right from a Finntroll album. They name Finntroll as an influence on Facebook and in this song you can hear that clearly. In the song Plague from the North (3th song on the EP) I notice something I thought I heard before on this EP. In the bridge, the timing seems off between the drums and guitars. It’s a little shame, not necessary on an studio album. The 5th and last song of this EP is called Trough the Runes and it’s starts of as a last song should start of with a cool guitar riff. Also the lyrics of this song are worth mentioning, well written and they suit the music perfectly.

All together it is a nice first EP. There´s definitely room for improvement but I´m sure that will come. I´m looking forward to Demoterion´s next record and hope to hear more creativity than. Cause from time to time this album is creative but I also hear stuff that has been done before by many other bands.