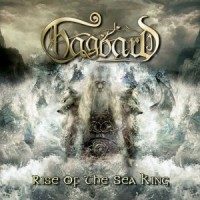 Hagbard is a Brazilian band of five, formed in 2010. Since they formed they’ve released a demo, and a single. Right now it’s time for their first full-length ‘Rise of the sea king’. As they say themselves they’d mix folk-influences and heavy metal to try to create their own unique sound.
And that’s immediately the problem. They ‘try’ to create their own unique sound, it only doesn’t work out that well. ‘Rise of the sea king’ is just an average folk-metalrelease, conform all standards. The sound is typically folk-metal, and seems to contain a lot of influences from Ensiferum and the old Turisas.
The first songs of this CD could better be ignored in my opinion. They’re to standard to get stuck in your head and they’re not really interesting at all. The band really catches my attention at the song ‘Mystical Land’. An acoustic song with an awesome flute- and violin-melody, and it reminds me a bit of the acoustic experiment Elvenking released a few years ago.
After this song, the album becomes a lot more interesting. More catchy melodies, harsher songs and riffs which are more memorable. However, not everything is great about this second half. Especially the song ‘Hidden Tears’ is a song that could better be left out. All of a sudden female vocals take the lead role in something that is supposed to be an emotional ballad, but it just doesn’t fit the rest of the album.
All in all this release isn’t really bad, though it’s too generic to add something new to the extensive folk-metalscene. However, you immediately recognize that this band has potential. Some songs are pretty good (Mystical land!) and some riffs are really catchy (Let us bring something for the bards to sing for example). A band to secretly keep an eye on.