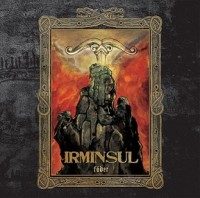 Irminsul’s album of 2009 was terrific. Nice melodies, solid riffs and very different from what we’re used to. Non the less, these Swedish guys din’t become a lot more popular and they’re probably underrated?
Maybe now the turning point has come! Irminsul will release their new album “Fäder” and shows on this album what they’re capable off. The fabulous describable sound of Irminsul is here again on this album.
This album contains 9 tracks of which the last two are a bit off topic.
Irminsul takes you along with it’s dragging riffs, along with their story in which they treat you on heavy grunt-chants, sweet female vocals and sharp grunts.
This album takes you to a place in your own imagination and remains there during the whole album.
The seventh track is somewhat more interspersed with vocal-melodies of the 80’s and ölbänk is a very merry drinking song which almost seems to be played by a different band.
The last track takes you back to the 80’s, to Neverending Story, to be more specific. Entirely in their own way, Irminsul takes you back to this movie and I listen to this record again and think of this movie with every track. Oops.

Good record, I can recommend it!