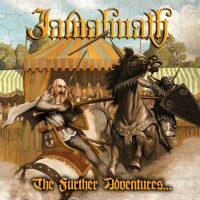 What do you get when you throw Trollfest, Feuerschwanz and Monty Python together and make it into a musical mix? Indeed, you get Jaldaboath. ‘The further adventures’ is the second album of this funny trio.
If you’ve read the influences from the first paragraph, you know more or less what you can expect. Cheap puns, silly jokes and sometimes some genius lyrics, with a musical background of chaotic heavy metal with folk-influences. The music is pretty congested, so it takes a few times listening before you’ve heard all the details in the music.
The band doesn’t take themselves serious, which is clear when you listen to the music and the lyrics. ‘The Wailing witch of Moolsecoomb’ is clearly based upon Metallica’s ‘Enter Sandman’ and ‘Dex the whispering dwarf’ clearly shows the influences from Iron Maiden. Even the ‘J-team’ is based around a very popular TV-theme, and I hope I don’t have to tell you which one that is!
This record is clearly meant to be funny, but there are a little too many cheap puns and silly jokes to be really funny. Musically it’s all pretty okay, but not good enough to make an impact. This is a typical band you want to see live. Perfect for when you’re drunk!