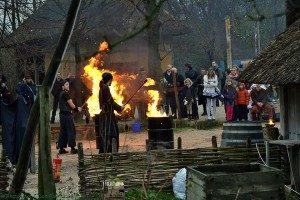 The first weekend of December of our agenda is as every year taken by the MidWinterFair, a folk-fair in the beautiful setting of open air museum Archeon. Next to countless stands with clothing, armor, weapons, books and many other handy things for the local viking there are as well many bands, a re-in-actment show and storytellers. The Archeon always remains the perfect setting for this yearly event, where you don’t walk trough castlegardens like the famous Elf Fantasy air, but you walk trough a real medieval village, a prehistoric camp and a Roman settlement.
The first act we find ourselves is Sowulo, a band formed with Tom Latten who the folk-metal fans may know from Chain of dogs, but as well singer Hrabnilaz and violinist Fusilan from Myrkvar, joind with the flutist from Seed. An ambient folk band, something you might not expect from this combination. But still it’s good and relaxing music. Though halfway the set I miss the vocals and the tension in it, so we went to the marketplace.
Halfway the day it was time for a band in which friend and college Sebastiaan would make his entrance. Amma, a couple of elfs who make subjects like blood, death and deceit sound very cute. Not really my music, so we decided to move on and find ourseles in a battle between Lannisters and Starks. This year the theme of the MidWinterFair was was Game of Thrones and this re-in-actmentshow was a part of this. After a long and bloody fight we had to move back from the Roman arena to the old Monastry where The Royal Spuds would give their show away.

The Royal Spuds
The Royal Spuds, a band I’ve seen a couple of times already. Of course they where here last year too. But since then, they’ve brought a new album, and I’ve seen them live in the meanwhile too.
Something I noticed was that just like the last time, as the entire band wants to do a soundcheck together, someone is always to the toilet. Very unprofessional and annoying for the crowd too. So, finally, all is settled and we’re good to go, oh, wait, first a cigarette. So we wait some longer. Than after a disordered start, we can finally kick of.
These men at least know how to throw a good party with all of their famous songs “Wanted: Drunk ‘n’ Alive” and “A Night like This” the crowd kept on going. But as well there’s space for many covers, “The Irish Rover”, “Finnegan’s Wake”, “Chip” and than there is this old sea shanty named “Roll and Go” a great set with enough to party on. But yet I hoped for some more of their own work in stead of all these easy covers. In the end the sphere was good and the crowd definitely had fun, unless this was a lot louder than the most of the band this day. It was a good show, but slowly I start to expect somewhat more of these men.

Rhovanion
Of course we stick around some longer to see one of the better folk-metalbands from Holland.
The fact that Rhovanion is working hard on their way to the top is known by the number of shows they give. Unless this is my fourth time this year I always go with growing enthusiasm. Everytime I see this young band get better and better. Recently a new bass player joined the band and this gives more comfort on stage. As well it’s great to see the guitarist feeling more secure on stage, something that’s as well for their frontman. The sound wasn’t as good as it was the last few times, but this is made up with with a lot of enthusiasm from the band. During the set the sound seems to get better a bit. Than I must say it’s quite an accomplishment to create a moshpit on a fair like this one, and many people looked with wicked faces to the strange spectacle that happened on the front rows. Luckily there where several who joined on the only mosh of the day. After all the famous songs Rhovanion treats us with every time, it was time for Devils Dance Floor, a cover from Flogging Molly.

After Rhovanion, we went to Rapalje for a short while. A band that excists for thousand years and is still fun to watch. But we found it a great idea to leave and drive our way back home.