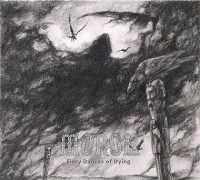 Immediately from the start the bad luck started. There is almost nothing that can be found about this band, and what I found was rather confusing. The band seemed to originate from either Russia or Germany. After quite some research, I found out that the band is based in Germany, but that the two founders originate from Russia. ‘Fiery dances of dying’ is, after they first released 3 demo’s, their first full-length.
And it immediately turned out great! Really melodic pagan black, in a way I hope to hear it more often. No tricks with keys or traditional instruments, no, just harsh and pounding guitars!
This is black metal just the way I like it, raw, brutal and harsh, but with a lot of melody. The guitar-parts could almost be called catchy, without taking away the overall brutality of the songs, which is great! The pacing of the songs is pretty high, though sometimes the band takes a break with a more subdued or acoustic passage. While the clean vocals are less good, this gets compensated by the diligent grunts and screams.
The highlight of this record comes with ‘With glow reddening sky’, which integrates all the elements that makes this band worthwhile to listen to. A beautiful solo, an acoustic intermezzo and a beautiful structure. If you want to get to know this band, make sure to listen to this song and be surprised by a great pagan-black debut record!