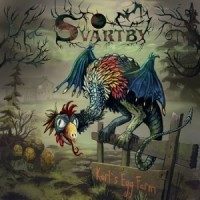 From the cold city of St. Petersburg hails the band Svartby. With their 2 song EP Karl’s Egg Farm they bring us their newest bits of music. Two songs doesn’t sound like enough music and for this band it is definitely not enough. What an awesome band!! Svartby doesn’t want to labeled because they claim to play every style they like in their music, their so called Svartcore. And they couldn’t be more right, everything that makes metal folk can be found in the music. It is brutal, metal and happy at the same time.

There is not much to say about the EP. The two songs (Karl’s Egg Farm and Morbid Quack) are both excellent songs. Well written and even better performed. The quality of the recording is just as good, everything sounds as it should and is in good balance.

Now there’s only one thing left and that is to buy this EP!! It can be purchased through their Bandcamp page and through their website. On Bandcamp you can make your own price for their entire discography. Don’t be afraid to pay extra, Svartby deserves it. I think we’re gonna hear a lot more from this band in the future.