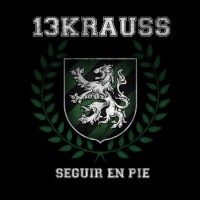 The crossover between punk and folk seems to be quite popular in Spain. A nice thing is, the Spanish bands aren’t all clones of Flogging Molly. Band like The Fatty Farmers and Brutus’ Daughters showed us the creativity of the Spanish folk. 13Krauss started originally with punk, but they saw ‘the light’ when they visited a The Real McKenzies show. And this is an influence which can be heard in their music. The prominent place of the bagpipes in their music is something we know of The Real McKenzies. Another shared element is the punk-feel, but after this the similarity ends. 13Krauss roots are in the punk and this can be heard. It’s nice folk with the emphasis on the bagpipe. Listen to the first track XIII en you immediately know what I mean. But the punk-element isn’t forgotten. This causes a lot of up-tempo tracks which make you move, if you want it or not.
And at this high speed, an album is quickly done, with about half an hour of music you can hardly speak of a full length, they could have added some more songs, but I suppose this is a ‘budget-problem’.
Even I don’t understand a word they sing, I like 13Krauss sings, like a lot of the other Spanish bands in their own language. This is something we don’t see often in the Celtic punk bands. The only track of this album in English is Insane and this is nice too, but it causes an more familiar sound at once.
And when you think of traditional Spain music, you think of great acoustic guitarists, and you can say the intro of Atlántida is a typical Spanish intro, after this they have worked on this song which was originally on their demo. It was already a great song, but now it’s very nice. It has got more ‘body’ than it had on the demo.

Spain has grown a very nice new branch on their folk-tree. 13Krauss has proven they own a spot in between the nicest Spanish bands. They have given their sound a nice twist, with their great bagpipe sound!