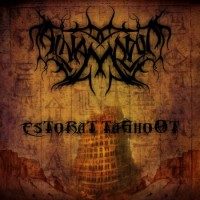 Together with the 2014 album ‘Heen Yadhar Al Ghasq’ we receive an older album ‘Estorat Taghoot’, a album which was released in 2010 already. But we like to say a few words about this album, so we can compare it with their new one.
This album starts with Arousal at Nebuchadnezzar Fortress, the thick dark atmosphere falls upon you like a dark smoky fog. The slow blackened sound is simply beautiful with it’s oriental themes and it’s very nice percussion. But after this track this magic is gone. The music becomes loaded with furious guitars, interspersed with some oriental tunes from the keys. But a sad thing is they seem to have crawled into a tin can, which gives creates a muted sound, which I can not really appreciate. This sounds more like a badly recorded demo, which does no justice to their music.

Too bad they have this kind of muted sound. The songs are quite nice, interspersed with nice oriental melodies. Hopefully they will come out of this tin can, so their music can get out to this world.