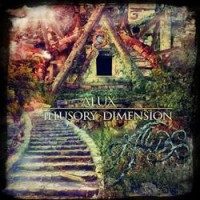 Alux describes their music as Sympholk, a blend of all kinds of music. Most of the time I listen to Alux, I think I’m watching a movie. Their music is suitable to be the soundtrack of a fantasy movie.
The album hits of with Umbral, a rather epic soundtrack, we’re on the edge of entering a fantasy. In Orb, some epic guitars are added and quite a nice metalvoice, which is a nice odd contradiction with the rest of the music, but I puts a smile on my face, so I can’t blame them for this ridiculous choice.
And this smile stays there in Heroes, with it’s nice old fashioned folk-like accordion sound. This track moves in all directions with fierce metal, acoustic guitar en than again this weird accordion, these two guys which form Alux must be completely mad.
After this we get Pareidolia and we are pushed back in our cinema-chair by some steward. ‘Sit and listen’ he says, but the musicians pull his nose and put in a funny way. And then we get another dreamy tune and the movie goes on. It seems to me our heroes are on a journey through a huge forest. And when you think some secrets will be revealed the dreamy soundtrack turns into a fierce metaltrack.
And so this weird story continues with Road’s Delusion to this Nightmarish Gala. Our Mexican heroes combine the metalvoice with solid guitar and a synth-choir! And end this emotional and musical rollercoaster with Epigrafe in the way it started, like a soundtrack.

Well, this was quite a journey. Looking back, I have really no clue where I’ve been. But it’s funny, that’s for sure. You’ll probably need to listen to the whole album to get the whole nice experience. Individual songs like Pareidolia are nice too, but when you listen to the whole story you get shaken up so much, it’s really nice. The vocals are a bit weak here and there, but the whole idea is so weird, it makes up for everything. And the rest of the music is nicely done with nice orchestrations and nice guitar. I think these two guys deserve a spot in a mental institution, but they don’t have to be cured, because I like to hear more of them.