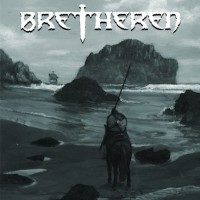 Bretheren has released a demo Vinland. A concept album that tells the story of the Vikings discovering North America over 1000 years ago. They declared this land as Vinland.
The music on this demo is played by one person. There are other musicians involved to play this live. The music is a rather epic. The guitars sounds rather nice on this demo, they give the music a lot of power, because other elements, like the drums, steal some of the strength of the music. Bretheren states this is a demo, so the songs can be changed later on. And that sounds fine to me. The compositions are very nice, they give this demo its strength.
But there is some work to do. Probably it sounds better live, on this demo it’s all kind of hollow and to spherical.
Considering this is a demo I’m very curious on the further work of Bretheren. Because I believe Bretheren is on the right track considering the compositions and when this is perfected this could be really nice.