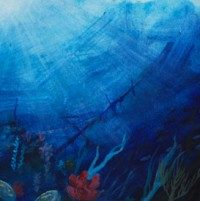 When you think of ‘pirate-metal’, the most people would immediately think of Alestorm. A few might think about the glorified thrash of Swashbuckle, but that’s basically it. Luckily there’s a new band that’s going to conquer the seven seas; Shtack.
It would be easy to use the clichés, which are often (mis)used within the piratemetal, once again. Luckily, Shtack chooses for a different direction. The sound is harsh, brutal and sounds more or less like melodic deathmetal. The music is supported by keys which ensure the true pirate feeling. Not jolly and happy like Alestorm, but rough and in your face, with a great feel for melody and groove.
While the band sounds pretty brutal, they clearly don’t take themselves seriously. Songtitles like ‘Satésaus’ or ‘Hikke Pikke Takke Teef’ should give you a clear idea what kind of lyrics these are. And while the lyrics might not be that serious, the music is seriously good! One point of criticism about the production though. In my opinion it would be better if the whole sound was a bit sharper and clearer. Besides that, the vocals aren’t clearly hearable in the musical violence.
A mighty fine debut from the pirates of Shtack. Are you fed up with the jolly pirate tunes, and do you prefer a more ‘in your face pirate attitude’? Then listen to Shtack!