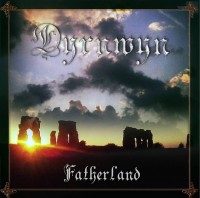 DyrnWyn possibly is a name you’ve never heard of before. That can be right, because with Fatherland, DyrnWyn releases their first demo. Or at least, I think so. Since all information on their bandpage can only be found in Italian, and I’m not that good in reading Italian, it was hard to figure out anything on their website. One thing was clear at least, the band originates from Italy.
So. Fatherland. The first release from DyrnWyn. A release that shows just fine what the band is capable of. While the production is pretty bad, it still is quite okay for a demo. At least you can hear clearly what kind of music DyrnWyn wants to create.
And that music is pretty standard folk-metal, mainly inspired by Ensiferum (which can be clearly heard in the guitars) and Cruachan / Waylander (can be heard in the flutes). The combination between these two instruments is done well, both are well-balanced within the music. The vocals are interchanged between grunts and screams, where the former has the upper hand. The music is catchy, but sometimes lacks coherence.
A fine demo for DyrnWyn, where the main issues are particularly focused around the production and the coherence within the songs. I’m curious where this band will end up, it might have potential.