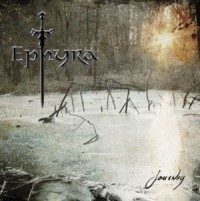 Ephyra is a band which exist for a few years now, but they changed their style over the years and added fantasy and medieval elements to their music. All these years of experience can be noticed in their music, when you make a debut-album like ‘Journey’, you show you have a lot of capabilities.
Starting with Back…. and as second track …to the Realm, you have a nice opening of an album. The keys are a bit too loud here, that’s a pity. The male vocals frightened me a bit here, because I’m not that fond of the screams as they can be heard in a lot of Italian bands. But don’t worry halfway there are female vocals added and this smooths it a bit, and this causes to give a nice tension between the male and female vocals, reminding a bit of Kivimetsän Druidi and this is a good thing. And despite it doesn’t sound like one of these bands, the fantasy elements remind of other bands in the fantasy genre as we can hear in Law of the Elves, there’s a whiff of Battlelore here. But the slow accordion-piece gives it an sound of their own.
They shift into 5th gear with the title-track Journey, with catchy guitar and a nice keyboard-piece. Very nice track, with beautiful female vocals as we don’t hear them often in folk-metal. Their quite clean a bit sharp here and there and they remind a bit of Eluveitie’s Anna Murphy sometimes.
So, we can say the skills of the musicians an singers is ok. But what about the compositions? Well, they are very nice. This is necessary when you tell fantasy tales like this, the changes in speed, volume, rhythms are part of telling a story, and they handle this very well.
The band proves they know how to express feelings in a song like Cold Pain, with nice acoustic guitars and an ever so beautiful vocal part, simply delicious. But after this sensitive song, the Dark Wolf is back and the whole feel of the band changes, no lovely hurt female voice, but grim and harsh male vocals.

A very, very nice debut by Ephyra. They know how to tell a nice story and the band is a proud owner of all the necessary ingredients. Harsh male and nice clean female ones, fine skilled musicians, very good songwriters, they have it all.