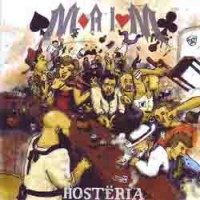 M.A.I.M. released their second EP recently, and what immediately catches you eye is the cover of this album. It’s a cartoon of a saloon. And there’s a lot going on in this saloon, there seems to be a fight, playing carts are all over the place and in the middle of this the barman and the fiddle player keep doing their jobs. Not the regular folk-metal cover…
What you get with this EP is four high speed tracks. The lyrics are quite nice, it are short stories, with a lot of humour most of the time. About a quest for the finest beer for instance, and a nice way to lure a dragon. The album ends with a bloody song about a fierce battle in which their homeland should be defended. In the midst of all this chaos the fiddler keeps playing his part without being distracted. So, you can say this suites the cover nicely.
Is it a stunning album, which blows me away? No, it isn’t, but it isn’t bad either. The tracks are nice, rather straight forward, but regarding this is an band which has to do everything themselves, it all sounds nice.

In a musical sense this isn’t a very spectacular album, but the lyrics have a nice humorous twist. Hopefully the band will expand this creativity to their music as well, because this can use a nice twist of their own a bit.