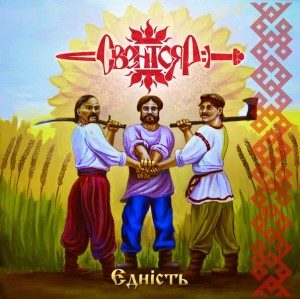 From the Ukraine with love… The people of Karkiv gather around this campfire to enjoy some music together and drink a pint and express their love for the good old live. Then the guitar and bass are plugged in and they’re joined by the drums.
Is it possible to create metal which almost sounds like heavy but traditional folk? Yes, this can be done. Sventoyar proves this on ‘Yednist’, with only drums, guitar ans bass they lay down a sounds which is filled in with the very traditional sounding female vocals of Poloneya. Bang there it is.
All the songs on this album sound like traditional folk-songs and that’s not strange, because this album of Sventoyar exist of Ukrain, Russian and Belorussian folksongs. The vocals are done in a very traditional way and gives it all an very authentic sound. The bass sounds delicious, like we’re used to by Sventoyar, with its very beautiful low and smooth sound. And there’s plenty of nice guitar-lines in the music too, also very nice. Too bad, they sound a bit convulsively in some spots.

Sventoyar has made a very nice heavy folk album with Yednist. It’s a very nice idea to capture all these folksongs on one album in a nice metalcoating. My compliments for this. Their previous album was a little bit heavier and I’m missing this a little. But on the other hand, the sound of this album is better. This is a band to watch out for, I’m already curious for their next album.