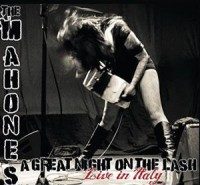 The biggest challenge for every Celtic Punk band, how to catch the high energy which is generated at a live performance, on a record. Fortunately, the Canadian Celtic Punkers had great plans for this year. Later on this year they will release two studio albums. To make this party complete, they recorded one of the gigs of their tour last year and they’re releasing this as a live album. ‘A Great Night On The Lash’, and surely a great night it is. In no less then 18 songs they throw all whiskey, pubs and other shit at you until you’re past the pint of no return and you only want more. The Mahones are like alcohol, you should stop somewhere, but you only keep on drinking, but believe me, you can get drunk on them, but never get a hangover.
The atmosphere of this gig is greatly captured and you get all their great songs, just like the Italians at this concert did. In between the loads of alcohol they worship some of their punkheroes with songs like Teenage Kicks and I Wanna be Sedated. It’s with this songs they’re leaving the folk a bit, but who cares…
In this great Mahones year you can expand your collection in a very nice way. With two albums with new songs to go, this live album is a real ‘must have’. The Mahones prove with this one Celtic Punk is at it’s best consumed live and the closest thing to being at a concert is a live-record. 18 Tracks of high energy songs, what do you want more. So, this one should definitely be a part of your collection.