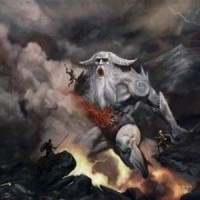 For every good folk-metalband there are at least 10 mediocre bands out there. Sometimes you find a little gem in the piles of crap, the large mountains of mediocrity which decorate the landscape of the folk-metalscene. Unfortunately, Valknacht isn’t one of them.
Valknacht is a French-speaking, Canadian band. As they say, they make ‘Heithen blackmetal’, which is apparently a synonym for generic paganmetal. High tempo, a lot of epicness, many tremolo riffs and deep grunts. While the musicianship is just fine, it never really gets interesting. Everything is way to standard to really be memorable. As soon as the song is finished, I forgot what I was listening, to be brutally reminded by it as soon as the next song starts.
Also, the mixing isn’t really optimal. The guitar is sometimes hard to hear because of the massive sound of the keys. The flutes (or samples, I’m not sure) which are used sound pretty dissonant, and are totally misplaced within the music.
Valknacht releases with ‘Le Sacrifice d’Ymir’ a completely meaningless record. While the musicians are more than fine individually, the songs are boring, tedious and aren’t catchy at all. Just leave it be and forget about it.