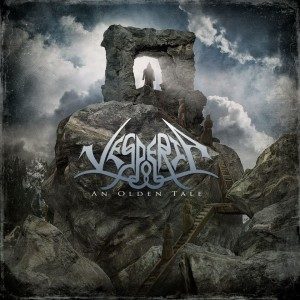 Finally, a new Vesperia album from the cold lands of Canada. Started under the banner Bolero I got fond of this sound real fast and with “An Olden Tale” the saga of these Canadians just continues.

“1000 Years Ago”, an heroic intro to set sails “With Omens of Sorrow” to just ride to battle mighty and fierce. It won’t take long ’till we confront the brute growls which is part of the Vesperia brand since the very beginning. Jolly tunes and raw guitarriffs battle each other while secretly you are banging your head on the stamping bassdrum. The third song is one we know, “The Swordsman” of the EP I’ve reviewed before. The song is recorded all over again if I’m correct. It sounds more complete now. Blunt and harsh, like Vesperia wants to present their songs.
“Forsaken Shores” starts more cheerful and it sounds like the most vulgar version of Equilibrium ever. This is typically an Vesperia song, it sounds somewhat happy and has something heroic, but above all it’s just violent and brute.
Just like that the albums blasts trough until you hear a pretty and peaceful sound.
“An Olden Tale”, it’s time for the last song on the record, as well as the titlesong. Vesperia as it can get and the ultimate highlight of the album. Tempo changes give a very refined sound to a song that’s rude and blunt above all. I’d really want to stand front row and go insane with these guys!